Although women dominate the insurance industry, there is a dramatic fall in the number that hold senior-level roles. Captive insurance professionals discuss their own experiences as well as CICA’s new Amplify Women initiative 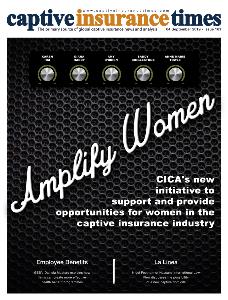 Women continue to dominate the insurance industry with 60 percent of insurance jobs every year since 2007, according to a current population survey of the US Bureau of Labor Statistics.

In 2016, 1.7 million women were employed in the US insurance sector, out of a total of 2.8 million workers in the sector, accounting for nearly 61 percent of females in the insurance workforce.

However, when it comes to senior-level positions, that percentage falls dramatically. A Women in Insurance survey showed that only 19 percent of females hold board seats, 11 percent of named inside officer positions, and 12 percent hold top official positions such as CEO, COO, and CFO. Despite compelling data that businesses benefit from gender diversity, the World Economic Forum has found that across all global sectors, women are only 28 percent as likely to reach leadership positions as men—and captive insurance is no exception to these facts.

The Pandemic and its Effects on the Captive Insurance Industry